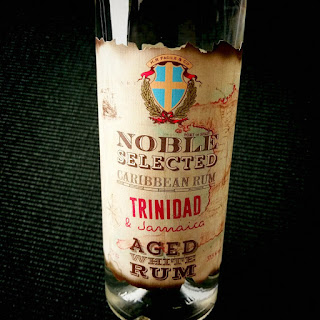 Noble Selected is a brand of rums from Swedish company Facile. The second release is this aged white rum sourced mainly from column distilled Trinidad rum aged on american bourbon casks for 3-5 years, but also some unaged Trinidad rum and about 5% unaged pot distilled Jamaica rum. The blend has rested in steel tanks before being diluted to 37,5% abv and bottled. Their previous dark rum had sugar added to it, but this one has not.

The press release lets us know that it’s a great mixing rum for Daiquiris and Mojitos, but before doing that I tried it neat, of course.
Nose: Sweet and round, vanilla and fudge, pungent arrak and even some coconut. Mouth: While it’s pretty sweet on the nose, the taste is dry and crisp, somewhat grassy, with lots of vanilla, zesty citrus notes, a light herbal spiciness and a touch of oak, then a brief burst of funk from tropical fruits and red berries which lingers on the tongue for quite a while. I’d say it’s a pretty well balanced rum which could use just a little more depth and maybe also a higher abv to reach its full potential.
Now, let’s move on to the cocktails. First I did exactly as the press release told me to – a Daiquiri (80 ml Noble Selected, 20 ml lime juice, 10 ml simple syrup – shake and strain) and while I understand why you would like to add lots of rum to compensate for the low abv, I found it to work best using 60 ml Noble Selected instead, making it a crisp refreshing cocktail with just the right amount of funk – yum! Next up I made a Mojito (50 ml Noble Selected, 30 ml lime juice, 20 ml simple syrup, 10 mint leaves, soda – muddle mint and lime, add syrup, rum and crushed ice and stir, top with more ice and soda, stir gently again) and nothing to complain about here, it’s light and clean and dangerously easy to drink. Last but not least I decided to try it in a Mai Tai (30 ml Noble Selected, 30 ml Hamilton Guyana, 30 ml lime juice, 15 ml Pierre Ferrand Dry Curacao, 7,5 ml Beachbum Berry’s Latitude 29 Orgeat, 7,5 ml simple syrup, shake with crushed ice, pour unstrained into a double old fashioned-glass, add more crushed ice and garnish with spent lime shell and a sprig of mint) and pairing the Noble Selected with Hamilton Guyana rum added some needed depth for a nice Mai Tai, and they actually worked very well together, with Noble Selected providing some light and earthy notes to balance out the funk of the demerara rum – super nice!
Noble Selected Aged White Rum is available at Systembolaget in Sweden.