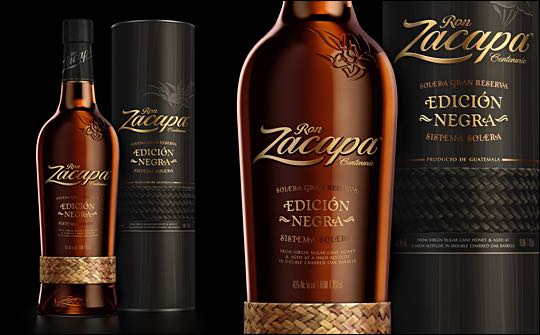 On November 17, I was invited to hotel suite 810 at Haymarket by Scandic for an exclusive relaunch of Ron Zacapa Edición Negra. It was released a couple of months ago but all bottles were sold out instantly. Today it was released in Sweden again in limited quantities so I guess it’s time to act fast!

Anyway, the relaunch started with a tasting of the three Zacapa rums available in Sweden, the 23yo, XO and last but not least Edición Negra, guided by Diageo rum expert Mikael Lundén and accompanied by a creme brulée, saffron swiss roll and chocolate truffle – all of them made with Ron Zacapa!

Ron Zacapa Edición Negra is a special edition of their 23yo, aged in double charred American oak casks and bottled at 43% which makes for a more intense and smoky flavour, like a gateway to rum for whisky connoisseurs.

Nose: Some caramel and vanilla sweetness, arrak, chocolate, ripe tropical fruit, oak and vague hints of smoke. Mouth: Rather deep and complex – definitely tastes less sweet than the 23yo – with a spicy kick which evolvs into a mix of dark chocolate, exotic fruit, molasses and a smooth lingering smokiness as it fades out.

After the tasting we were introduced to award-winning bartender Johan Evers, who told us about his cocktail competition adventures in Miami, where he ended up being among the top 10 in the world.

Johan then served a couple of Christmas cocktails for us to enjoy – all of them very tasty – and here are the recipes! I think that the higher abv and the gentle smokiness of the Edición Negra make it an intriguing cocktail ingredient despite the somewhat high price, but while the below Dark & Stormy variation was a really nice cocktail, the character of the rum was subdued by adding the smoky Scotch.

Pour all ingredients into a saucepan and heat slowly, serve and garnish with ground cinnamon.

Pour rum and ginger beer in a glass, add ice and top with Lagavulin, garnish with a mint sprig.